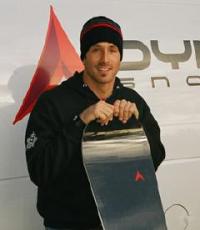 Seth Wescott was great; articulate, authentic, eloquent and completely gracious as he stayed long after the keynote to sign autographs. Thank you for all your assistance.

Wescott rose to the top of the international snowboard cross (SBX) ranks in 2004-05 when he won gold at the 2005 World Championships. He became the first snowboard cross Olympic champion in history. In the final at the Torino Games, Wescott trailed Slovakia's Radoslav Zidek halfway down the course. But the Maine resident made a sly move, passing Zidek on a banked turn, and held onto the lead over the last few jumps. At the bottom, Wescott celebrated by wrapping himself in the American flag used in the funeral ceremony for his grandfather, a veteran of World War II.

During the summer of 2005, Wescott became a business owner when he bought a restaurant at the base of Sugarloaf Mountain (formerly the Sugarloaf Brewing Company) with some friends. When Wescott isn't riding or working on his land, he enjoys surfing and skateboarding.

In the 2010 Olympics, Wescott defended his gold medal for the snowboard cross.

Secure Seth Wescott for Your Event

Based on your interest in Seth Wescott as a speaker or for a personal appearance, Direct Sportslink has provided you additional links below for other sports talent with similar appearance fees, speaker topics, and categories that match Seth Wescott.