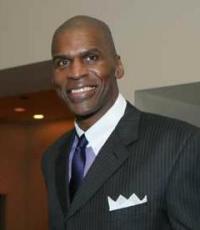 He was a key member of three Boston Celtic NBA Championship teams; He is a member of the Basketball Hall of Fame; He has played more NBA games than any person in history
Fee Range: $5,000 - $10,000
Secure Robert Parish
for Your Event

Parish is a retired NBA center. His nickname was "The Chief", after the mute Native American in the film One Flew Over the Cuckoo's Nest. According to legend, former Boston Celtics forward Cedric Maxwell gave Parish this nickname because of his stoic nature.

After a modest career at Centenary College of Louisiana, Parish was drafted in the first round of the 1976 NBA Draft by the Golden State Warriors, before being sent to the Boston Celtics, where he played his best years. Playing 14 years with the Celtics from 1980 to 1994, he won three NBA titles (1981, 1984 and 1986) teaming with legendary small forward Larry Bird and power forward Kevin McHale. The trio is regarded by many as the best frontcourt in NBA history and was dubbed the "Big Three".

He played two more seasons with the Charlotte Hornets and then played his final season with the Chicago Bulls in 1996-97, which led to his fourth NBA title. At 43, he was one of the oldest players to ever play in an NBA game and at the time of his retirement his 1,611 games played over 21 seasons were unmatched.

In honor of his achievements, the Celtics retired Parish's 00 jersey number in 1998. He was enshrined in the Basketball Hall of Fame in 2003.

Secure Robert Parish for Your Event

Based on your interest in Robert Parish as a speaker or for a personal appearance, Direct Sportslink has provided you additional links below for other sports talent with similar appearance fees, speaker topics, and categories that match Robert Parish.