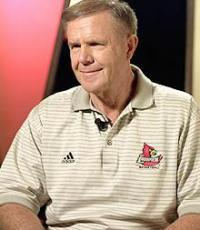 Denny Crum is a former college men's basketball coach. He is best known for coaching the University of Louisville between 1971 and 2001, compiling a 675-295 record.

He guided Louisville to two NCAA championships (1980, 1986). Crum is widely credited with pioneering the now common strategy of scheduling tough non-conference match-ups early in the season in order to prepare his teams for March's NCAA tournament, where one defeat ends the season. He also was an early user of the 2-2-1 zone press, and his teams' exciting style of play earned them the nickname the "Doctors of Dunk".

Crum's 1980 national champions are thought to have popularized the High-5. Between his initial season at Louisville and his second national championship in 1986, Crum guided the Cardinals to six final fours, earning him the monikers "Mr. March" and "Cool Hand Luke". In 1994 Crum was inducted into the Naismith Memorial Basketball Hall of Fame. He finished his career with an NCAA Tournament Record of 42-23. In his 30 years as a Division 1 head coach he had 21 20-win seasons, averaging 23 wins per year. Prior to coaching at Louisville Crum served as an assistant to John Wooden at UCLA.

Secure Denny Crum for Your Event

Based on your interest in Denny Crum as a speaker or for a personal appearance, Direct Sportslink has provided you additional links below for other sports talent with similar appearance fees, speaker topics, and categories that match Denny Crum.