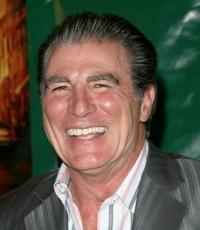 He is the inspiration behind the 2006 hit movie Invincible; He is the oldest non-kicker to ever play in the NFL without having attended college
Fee Range: $20,000 - $30,000
Secure Vince Papale
for Your Event

Vince Papale attended 's College, 1964-1968, and graduated with an MS Degree in Marketing/Management Science.  He was awarded a full athletic scholarship for Track & Field.  Papale captained the Track Team his Senior Year and was recipient of Most Outstanding Senior Athlete in 1968.  He still holds the Indoor Pole Vault record.

Papale left Interboro in the spring of 1974 to tryout for the Philadelphia Bell, of the World Football League.  He made the team as a Wide Receiver, and played for them for 2 seasons (the league folded in 1975).

In 1976, at the age of 30, Vince tried out for the Philadelphia Eagles, made the Team, and became the oldest rookie in the history of the NFL. He still is!  He was with the Eagles for 4 seasons, as a wide receiver, and was voted Special Teams Captain by his teammates.  A shoulder injury ended his career.  Papale was voted Man of the Year by the Eagles, in 1978, for his many charitable activities, and honored by the NFL.

After being retired by the Eagles after the 1979 season he was a TV and radio broadcaster for 8 years.  After that Vince entered the world of commercial mortgage banking which led to his present position as a Marketing Executive & Special Projects Director for Sallie Mae, the nation's #1 student financial aid company.

He has also worked with:  the Eagles Fly for Leukemia, the Police Athletic League, the Special Olympics, Maxwell Football Club, the Sunshine Foundation, the Boy Scouts, and the Variety Club.

Vince has received the Chapel of the Four Chaplain's Humanitarian Award, the 's Gold Award, and the Jaycee's Distinguished Service Award.  And as mentioned, in 1978, was a finalist for the Byron "Whizzer" White Award, presented annually to the NFL Player who shows the highest level of community awareness and involvement.

Secure Vince Papale for Your Event

Based on your interest in Vince Papale as a speaker or for a personal appearance, Direct Sportslink has provided you additional links below for other sports talent with similar appearance fees, speaker topics, and categories that match Vince Papale.