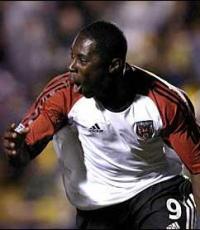 In 2004, he became the youngest ever professional sportsman in the United States since 1887
Fee Range: Contact Us
Secure Freddy Adu
for Your Event

Adu learned to kick a ball at the age of two; soon after, he was hitting rocks and refreshment bottles barefooted like many African soccer stars before him. Adu left Ghana with his family in 1997 after his mother won a lottery for a United States visa. Adu and his younger brother attended elementary school at Sequoyah Elementry School in Derwood, Maryland.

At age 13, Adu joined the Bradenton Academy, U.S. Soccer's premier youth residency program. At the age of 14, he signed a professional contract with Major League Soccer. He is now a resident of Potomac, Maryland in the United States and a U.S. citizen.

Adu played for the United States in two tournaments in 2003, the FIFA U-17 World Championship in Finland and the World Youth Championship in the United Arab Emirates. In order to allow Adu to play close to home, MLS assigned him to D.C. United, on November 18, 2003, working a deal with the Dallas Burn. Adu effectively became the first player selected in that draft, two months before it officially took place.

Adu was in the starting lineup for the 2011 CONCACAF Gold Cup Final vs. Mexico. He was part of  both USA goals.

Secure Freddy Adu for Your Event

Based on your interest in Freddy Adu as a speaker or for a personal appearance, Direct Sportslink has provided you additional links below for other sports talent with similar appearance fees, speaker topics, and categories that match Freddy Adu.