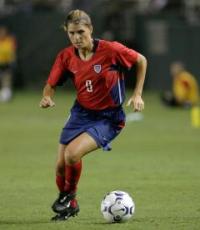 She is one of the most well known retired United States female athletes; She is a two-time Olympic Gold Medalist; She was the 1995 Women's World Cup MVP
Fee Range: Contact Us
Secure Mia Hamm
for Your Event 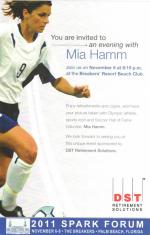 A Mia Hamm personal appearance, Mia Hamm speaking engagement, or Mia Hamm endorsement will reflect well on your company. To hire Mia Hamm now for any corporate appearance, fundraiser, motivational speaker event, personal appearance, autograph signing, or website endorsement please contact our celebrity agents at 1-877-6-SPORTS. We will contact Mia Hamm or contact Mia Hamm's agent and provide you with the booking fees and availability immediately upon your request. Direct Sportslink is the only sports speakers bureau and talent booking agency based in the United States securing only sports talent for corporations, associations, and organizations for motivational speaking engagements, personal appearances, and endorsements. We are the premier sports celebrity booking agency and a sports celebrity procurement expert. Accordingly, we will provide you with any relevant Mia Hamm website information and booking agent details so that you can hire Mia Hamm for your next event.

The youngest player ever to play for the national team at age 15, Mia later attended the University of North Carolina at Chapel Hill. She helped take the Tar Heels to four consecutive NCAA women's championships. She was an All-American and Atlantic Coast Conference player of the year for the last three years of her college tenure.

In 1991, when the US women's national team won the FIFA Women's World Cup for the first time with Hamm and teammates including Michelle Akers, Brandi Chastain, and Kristine Lilly, Hamm became the youngest American woman to win a World Cup championship at the age of 19. In 1993, she graduated from college with the all time records for her conference in goals with 103, assists with 72, and total points with 278.

In 1996, Hamm and the rest of the US women's national team played for the gold medal in the 1996 Summer Olympics in front of 80,000 spectators in Athens, Georgia, then an all-time record for any women's sporting event. That day, Hamm and her teammates were able to beat China to win the gold medal.

In March 2004, Hamm and former USA teammate Michelle Akers were the only two women, and the only two Americans, named to the FIFA 100, a list of the 125 greatest living soccer players selected by Pelé and commissioned by FIFA for that organization's 100th anniversary.

She helped lead Team USA to a gold medal at the 2004 Summer Olympics, and was also chosen by her fellow US Olympians to carry the American flag at the Athens Closing Ceremonies.

Secure Mia Hamm for Your Event

Based on your interest in Mia Hamm as a speaker or for a personal appearance, Direct Sportslink has provided you additional links below for other sports talent with similar appearance fees, speaker topics, and categories that match Mia Hamm.