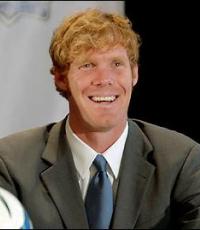 He is one of the most notable retired U.S. soccer players; He was named 1995 U.S. Soccer Athlete of the Year; He has served as a soccer analyst for ESPN
Fee Range: Contact Us
Secure Alexi Lalas
for Your Event

Alexi Lalas is a retired American soccer player who played mostly as a defender for the United States national team in the 1994 FIFA World Cup.

Following his playing career, Lalas served as President and General Manager of the San Jose Earthquakes, New York Red Bulls and Los Angeles Galaxy of Major League Soccer. He was elected to the National Soccer Hall of Fame in 2006.
He has announced Olympic soccer matches for NBC and also worked as a soccer analyst with ESPN and ABC Sports.
Secure Alexi Lalas for Your Event

Based on your interest in Alexi Lalas as a speaker or for a personal appearance, Direct Sportslink has provided you additional links below for other sports talent with similar appearance fees, speaker topics, and categories that match Alexi Lalas.