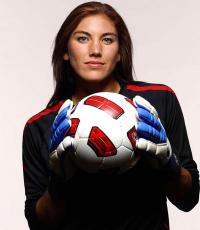 A Hope Solo personal appearance, Hope Solo speaking engagement, or Hope Solo endorsement will reflect well on your company. To hire Hope Solo now for any corporate appearance, fundraiser, motivational speaker event, personal appearance, autograph signing, or website endorsement please contact our celebrity agents at 1-877-6-SPORTS. We will contact Hope Solo or contact Hope Solo's agent and provide you with the booking fees and availability immediately upon your request. Direct Sportslink is the only sports speakers bureau and talent booking agency based in the United States securing only sports talent for corporations, associations, and organizations for motivational speaking engagements, personal appearances, and endorsements. We are the premier sports celebrity booking agency and a sports celebrity procurement expert. Accordingly, we will provide you with any relevant Hope Solo website information and booking agent details so that you can hire Hope Solo for your next event.

In 1999, Hope went to play for the University of Washington Huskies where she switched to the goalkeeper position after competing as a forward in high school. Hope quickly adapted to her new defensive role and was named a four-time All-Pac-10 athlete and a three-time NSCAA All-American. After leaving the Huskies, she is considered one of the best goalkeepers in Washington’s history as she notched 18 shutouts, 325 saves, and  had a 1.02 goals against average.
In 2003, she was drafted to the WUSA’s Philadelphia Charge. Following her time with the Charge, she played for Kopparbergs/Göteborg FC of Göteborg, Sweden in the Swedish Premier Division in 2004 and for Olympique Lyonnais in the French First Division in 2005. Hope first represented her country in 2005 when she was promoted to the starting goalkeeper for the U.S. Team and started 7 matches, earning 7 shutouts. In 2007, Solo started 15 games for a team record of 13-0-2, allowing only 8 goals. She also started four games in the 2007 FIFA Women’s World Cup.
Hope once again joined the U.S. Women’s Olympic Soccer team in 2008 in Beijing. The United States’ team won 1-0 in extra time to win the Gold Medal against Brazil.
In September 2008, Solo was drafted to the St. Louis Athletica in the newly formed Women’s Professional Soccer league debuting in 2009. She finished the season with eight shutouts and was named the WPS Goalkeeper of the Year.During the 2011 FIFA Women's World Cup in Germany, she became the twenty-seventh American woman, and second goalkeeper, to reach 100 caps with her start in the 3–1 semifinal win over France.  Solo won the “Golden Glove” award for best goalkeeper, and the “Bronze Ball” award for her overall performance. She was also featured in the “All-star” team of the tournament.
Secure Hope Solo for Your Event

Based on your interest in Hope Solo as a speaker or for a personal appearance, Direct Sportslink has provided you additional links below for other sports talent with similar appearance fees, speaker topics, and categories that match Hope Solo.