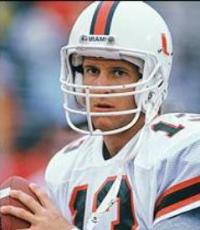 In his first year as a starter at Miami, Torretta garnered further attention by stealing the show in a nationally-televised 1991 game versus the Houston Cougars and their Heisman-front running quarterback, David Klingler. As Miami's defense cut down Houston's run-and-shoot offense, Torretta was putting on the performance that many expected out of Klingler en route to a 40-10 victory. Torretta would go on that season to lead Miami to a 4th quarter comeback on the road versus #1 Florida State and ultimately to an undefeated season and a co-national championship.

Torretta passed for more than 3,000 yards his senior year in 1992 on his way to winning the Heisman that season. His career as quarterback at the University of Miami was hugely successful, with Torretta leading the team to 26 wins and only one loss.

Gino played with five different teams in the NFL during his career. He retired from the NFL in 1997 after 5 seasons. He followed his NFL career with a position at Wachovia Securities as a Senior Financial Advisor. He has worked in the institutional and high net worth marketing team of Gabelli Asset Management in the company's Florida office. He has also been the Chairman/CEO of Touchdown Radio.

Secure Gino Torretta for Your Event

Based on your interest in Gino Torretta as a speaker or for a personal appearance, Direct Sportslink has provided you additional links below for other sports talent with similar appearance fees, speaker topics, and categories that match Gino Torretta.