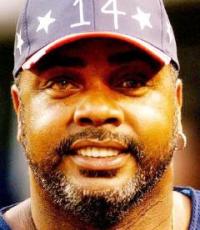 He is a former National League MVP, two-time batting champion, and was a member of three World Series champion teams
Fee Range: $2,000 - $5,000
Secure Dave Parker
for Your Event

He began his career on July 12, 1973 with the Pittsburgh Pirates, for whom he played from 1973 to 1983. In 1977, he was National League batting champion, a feat he repeated in 1978 when he was named the National League's MVP. The Pirates rewarded him with baseball's first million-dollar-per-year contract. The following year, he was an instrumental part of the Pirates' World Series championship team.

At the end of the 1983 season, Parker became a free agent and signed with the Cincinnati Reds. In Cincinnati, he returned to the form that made him an All-Star in Pittsburgh. In 1985, he enjoyed his best season since he won the 1978 MVP with a .312 batting average, 34 home runs, and 125 RBI. Parker finished second in 1985 MVP voting to Willie McGee.

After the 1987 season, Cincinnati traded Parker to the Oakland Athletics for José Rijo and Tim Birtsas. In Oakland, Parker was able to extend his career by spending most of his time as a designated hitter. Although injuries and age caught up to him to a degree -- he hit just .257 with 12 homers in 377 ABs in 1988 and .264 with 22 homers in 553 ABs in 1989 -- his veteran leadership was a significant factor in the A's consecutive World Series appearances.

Parker's last season was 1991. He played for the Angels until late in the season when he was released. Toronto signed him as insurance for the pennant race, and Parker hit .333 in limited action. At the end of the year, Parker retired.

His career statistics are comparable with those of many Baseball Hall of Fame members. Some career achievements include 2712 hits, 339 home runs, 1493 runs batted in and a lifetime batting average of .290. Parker was also known as a solid defensive outfielder with a powerful arm.

Secure Dave Parker for Your Event

Based on your interest in Dave Parker as a speaker or for a personal appearance, Direct Sportslink has provided you additional links below for other sports talent with similar appearance fees, speaker topics, and categories that match Dave Parker.