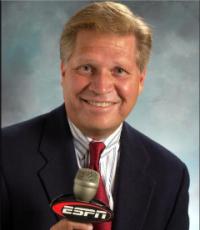 He is best known for his work as a NFL reporter
Fee Range: Contact Us
Secure Chris Mortensen
for Your Event

Since starting his career with the South Bay Daily Breeze (CA) in 1969, Mortensen has received numerous awards in journalism. In 1978, he won the National Headliner Award for Investigative Reporting in all categories.

Mortensen says his journalism career began once he realized that he no longer could compete in football, basketball and baseball beyond high school. He foresook his goal of being a teacher and coach when he realized how competitive sports journalism could be - this path taken after he was a "first round draft pick" by the U.S. Army, which he served honorably during the Vietnam conflict.

Since first appearing on ESPN in 1991, Mortensen has provided reports for the network's Emmy Award-winning programs NFL GameDay/NFL Countdown/Sunday NFL Countdown and the Outside the Lines series. He has also served as an analyst for ESPN's coverage of the NFL Draft.

Mortensen is the author of the 1991 book Playing for Keeps: How One Man Kept the Mob from Sinking Its Hooks into Pro Football.

Secure Chris Mortensen for Your Event

Based on your interest in Chris Mortensen as a speaker or for a personal appearance, Direct Sportslink has provided you additional links below for other sports talent with similar appearance fees, speaker topics, and categories that match Chris Mortensen.