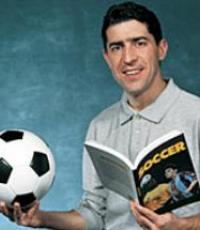 He is considered one of the most skillful players to ever wear the U.S. soccer jersey; He was the first player to sign with Major League Soccer
Fee Range: Contact Us
Secure Tab Ramos
for Your Event

A Tab Ramos personal appearance, Tab Ramos speaking engagement, or Tab Ramos endorsement will reflect well on your company. To hire Tab Ramos now for any corporate appearance, fundraiser, motivational speaker event, personal appearance, autograph signing, or website endorsement please contact our celebrity agents at 1-877-6-SPORTS. We will contact Tab Ramos or contact Tab Ramos' agent and provide you with the booking fees and availability immediately upon your request. Direct Sportslink is the only sports speakers bureau and talent booking agency based in the United States securing only sports talent for corporations, associations, and organizations for motivational speaking engagements, personal appearances, and endorsements. We are the premier sports celebrity booking agency and a sports celebrity procurement expert. Accordingly, we will provide you with any relevant Tab Ramos website information and booking agent details so that you can hire Tab Ramos for your next event.

Born in Uruguay, Ramos emigrated to the United States and New Jersey at the age of 11. He went to college at NC State and got his first cap for the US National Team on January 10, 1988 against Guatemala, and also played in the 1988 Summer Olympics. After playing for the US in the 1990 World Cup, he was named U.S. Soccer Athlete of the Year in 1990.

On January 3, 1995 Ramos became the first player signed with MLS, allocated to the future New York/New Jersey franchise, which became the MetroStars. For that year, the league loaned him out to Mexican club Tigres. On September 7, 1997, Ramos scored one of the most important goals in US history, against Costa Rica in a 1-0 World Cup qualifier win. In 1998, he played in his third World Cup, becoming one of the first three US players (Eric Wynalda, Marcelo Balboa) to do so.

Ramos retired from soccer after seven years with the MetroStars (1996-2002) as the last original member of the team. Ramos was elected to the National Soccer Hall of Fame on the first ballot, in 2005.

Secure Tab Ramos for Your Event

Based on your interest in Tab Ramos as a speaker or for a personal appearance, Direct Sportslink has provided you additional links below for other sports talent with similar appearance fees, speaker topics, and categories that match Tab Ramos.