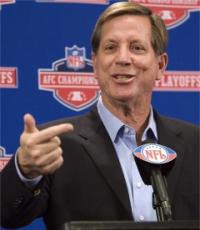 He has led several NFL teams to the playoffs as a Head Coach; He molded Troy Aikman into a Hall of Fame quarterback while helping the Cowboys become a dynasty
Fee Range: $20,000 - $30,000
Secure Norv Turner
for Your Event

Turner was the offensive coordinator with the Dallas Cowboys on Jimmy Johnson's staff when Dallas won back to back Super Bowls in 1992 and 1993. Turner got much of the credit for not only their success, but for helping shape quarterback Troy Aikman into a Hall of Fame player.

In 1994, following his success with the Cowboys, Turner was hired as the head coach of the Washington Redskins. In 1996 Turner led the Redskins to a 7-1 start and made the playoffs in 1999.

On February 19, 2007 Turner was hired as the new head coach of the San Diego Chargers. Turner led the Chargers to their first playoff victory since 1994 with a victory over the Tennessee Titans, followed by a second playoff win over the Indianapolis Colts.

Secure Norv Turner for Your Event

Based on your interest in Norv Turner as a speaker or for a personal appearance, Direct Sportslink has provided you additional links below for other sports talent with similar appearance fees, speaker topics, and categories that match Norv Turner.