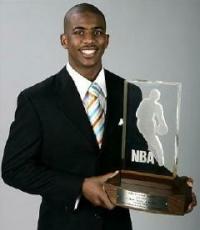 As a senior at West Forsyth High School in Clemmons, North Carolina, Paul was a 2003 McDonald's All-American and was named North Carolina's Mr. Basketball for 2003 by The Charlotte Observer.

Paul attended Wake Forest University in Winston-Salem, North Carolina. He played there for two years leading the Demon Deacons to two NCAA Tournaments, and one Sweet Sixteen appearance. He left Wake Forest with records near the top of nearly every offensive category.

After being drafted fourth in the 2005 NBA Draft by the New Orleans Hornets, Paul led all rookies in points, assists, steals, and minutes, earning him the 2006 NBA Rookie of the Year Award. Paul finished the 2005-06 season averaging 16.1 points, 7.8 assists, and 5.1 rebounds. He was also the only unanimous selection to the 2005-06 NBA All Rookie First Team.

In 2008, Paul helped the Hornets clinch a playoff spot for the first time since the 2003-04 season. The Hornets ultimately finished the season with a 56-26 record, the best record in team history, and finished #2 overall in the NBA Western Conference standings. He was selected to represent the Western Conference in the 2008 NBA All-Star game.

He was traded to the Los Angeles Clippers in 2011. He has been a member of several Gold Medal winning Olympic men's basketball teams.

Secure Chris Paul for Your Event

Based on your interest in Chris Paul as a speaker or for a personal appearance, Direct Sportslink has provided you additional links below for other sports talent with similar appearance fees, speaker topics, and categories that match Chris Paul.