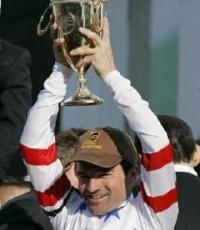 In each of his first three years racing in Maryland, Kent Desormeaux won more races than any other jockey in the U.S. He is one of only four jockeys to have won three national titles in a row. No longer an apprentice, in 1989 he won his the Eclipse Award for Outstanding Jockey and another in 1992. Desormeaux, along with Chris McCarron and Steve Cauthen, are the only jockeys to win the Eclipse Award in both the apprentice and overall categories.

In 1989, Desormeaux set the current record for most wins in a year with 598. In 1995, he scored his second Breeders' Cup title when he beat the "boys" in the Breeders' Cup Sprint with the filly Desert Stormer.

On June 6, 2009 Desormeaux finally got the one win that had eluded him his entire career, riding Summer Bird to victory in the 2009 Belmont Stakes.

Secure Kent Desormeaux for Your Event

Based on your interest in Kent Desormeaux as a speaker or for a personal appearance, Direct Sportslink has provided you additional links below for other sports talent with similar appearance fees, speaker topics, and categories that match Kent Desormeaux.