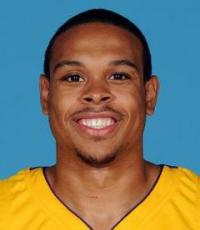 Shannon Brown was named 2003 Illinois Mr. Basketball and a McDonald's All-American. He played college basketball for the Michigan State Spartans. His vertical leap is one of the highest in the NBA. and he can often be found on ESPN Sportscenter with highlight dunks.

Shannon Brown's basketball story is one filled with great determination. After being cut and traded by several teams, Shannon has certainly found success an active part of the Lakers rotation.

Brown was drafted in the first round with the 25th pick of the 2006 NBA Draft by the Cleveland Cavaliers. On February 21, 2008, Brown was traded to the Chicago Bulls. he then signed with the Charlotte Bobcats.

On February 7, 2009, Brown was traded to the Los Angeles Lakers where his career skyrocketed. On July 6, 2009, Brown agreed to return to the Lakers for two years and $4.2 million.

Shannon was selected in the 2010 Sprite Slam Dunk Competition during NBA All-Star weekend.

He signed a contract with the Phoenix Suns in 2011.

A motivational speaking engagement from Shannon is sure to inspire your audience members about persrverance, hard work, determination and staying focused on their goals. He is the ideal speaker for a basketball sports camp. Click here to view his basketball camp testimonial.

Secure Shannon Brown for Your Event

Based on your interest in Shannon Brown as a speaker or for a personal appearance, Direct Sportslink has provided you additional links below for other sports talent with similar appearance fees, speaker topics, and categories that match Shannon Brown.