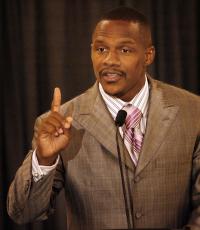 He was a four time Pro Bowl selection; He is inducted in the New Orleans Saints Hall of Fame
Fee Range: $5,000 - $10,000
Secure Joe Horn
for Your Event

A Joe Horn personal appearance, Joe Horn speaking engagement, or Joe Horn endorsement will reflect well on your company. To hire Joe Horn now for any corporate appearance, fundraiser, motivational speaker event, personal appearance, autograph signing, or website endorsement please contact our celebrity agents at 1-877-6-SPORTS. We will contact Joe Horn or contact Joe Horn's agent and provide you with the booking fees and availability immediately upon your request. Direct Sportslink is the only sports speakers bureau and talent booking agency based in the United States securing only sports talent for corporations, associations, and organizations for motivational speaking engagements, personal appearances, and endorsements. We are the premier sports celebrity booking agency and a sports celebrity procurement expert. Accordingly, we will provide you with any relevant Joe Horn website information and booking agent details so that you can hire Joe Horn for your next event.

Horn was drafted by the Kansas City Chiefs in the fifth round of the 1996 NFL Draft, and also played for the New Orleans Saints and Atlanta Falcons. He played college football at Itawamba Community College.

Horn signed with the New Orleans Saints in 2000 and immediately surpassed their expectations ranking in the top ten in receptions (7th), yards (8th) and touchdowns (9th) that year. Given a starting role with the Saints, "Hollywood", a nickname he picked up while with the Kansas City Chiefs for his particular style of dress and a name which carries to this day, quickly proved himself to be a premiere NFL receiver. He was selected to the Pro Bowl four out of his seven years with the Saints.

In the wake of Hurricane Katrina, Horn was noted for his support for the people of New Orleans and the Gulf region. As a leader of the Saints, he served as a public face of the team in many community events in recent months. He frequently visited evacuees in both San Antonio and the Houston Astrodome during the aftermath of Katrina.

After the 2006 season, Horn signed a contract with the Atlanta Falcons but he did not play in the 2008 or 2009 seasons. In May 2010, Horn was selected for induction into the Saints Hall of Fame. On June 23, 2010 it was announced that Horn had signed a contract with the Saints. Two days later, on June 25, it was announced that Horn would officially retire from football as a member of the Saints. Since retiring, Horn has promoted his own "Bayou 87" barbeque sauce and traveled around the Gulf Coast region doing in-store promotions.

Secure Joe Horn for Your Event

Based on your interest in Joe Horn as a speaker or for a personal appearance, Direct Sportslink has provided you additional links below for other sports talent with similar appearance fees, speaker topics, and categories that match Joe Horn.