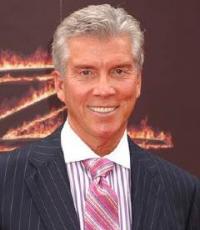 He is an internationally famous boxing ring announcer, best known for his trademark introduction of, "Let's Get Ready to Rumble"
Fee Range: $10,000 - $20,000
Secure Michael Buffer
for Your Event

With his tuxedo image and famous trademarked phrase, Michael Buffer is one of the most recognized faces in the world of sports and entertainment due to his 20 plus years of announcing many of the biggest championship boxing events with "LET'S GET READY TO RUMBLE!"® (hereinafter referred to as "LGRTR?®).

Buffer announces internationally for many different sports, entertainment, corporate and private events often utilizing "LGRTR!?®. He is considered the "Premier Sports and Entertainment Announcer" by millions of fans worldwide. He is in high demand internationally for TV/Film/Radio voice-over work, as a product spokesperson, TV commercials and special personal appearances for sports, entertainment, corporate events and special promotions.

"LGRTR!?® is known as the "clarion call to the pure integrity of the competitive spirit?, promoting an "adrenalin boosting, positive will to win attitude!" in the hearts and minds of fans of all ages.

Many NFL, NBA, MLB and NHL teams create a higher level of excitement playing Mr. Buffer's "LGRTR!?® and the player introductions before the start of their home games through special recordings or the licensed use of him voicing his famous phrase from the CD titled ESPN Jock Jams Vol. 1. The Buffer Partneship is consistently inundated with requests for personal appearances or special voice tapes by Professional Sports Teams, Minor League Teams and Collegiate Teams representing all sports, along with numerous corporate functions, T.V. shows, movies and cartoons (such as the Fox Network T.V. show, "The Simpsons" and Comedy Central's "SouthPark?) and various private functions.

Buffer's international exposure is huge, with Europe being his largest market outside the U.S. Michael Buffer has established himself as an American sports icon and his "Let's Get Ready to Rumble®" trademark phrase, surpassing over $400,000,000 in retail sales of its licensed and branded products, has firmly positioned itself as a part of American Culture. He travels from Los Angeles, California.

In 2008 Buffer was treated for throat cancer.

Secure Michael Buffer for Your Event

Based on your interest in Michael Buffer as a speaker or for a personal appearance, Direct Sportslink has provided you additional links below for other sports talent with similar appearance fees, speaker topics, and categories that match Michael Buffer.