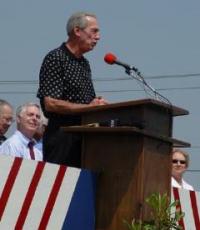 Jarrett was best known for his calm demeanor, and he became known as "Gentleman Ned Jarrett". Jarrett was introduced to cars early in life: his father let him drive the family car to church on Sunday mornings when he was nine years old.

Jarrett raced in his first national race at the 1953 Southern 500 at Darlington Speedway. He was out after 10 laps after the engine leaked oil. Jarrett was the 1955 track champion at Hickory Motor Speedway. Jarrett came in second driving in the Sportsman series (now Busch Series) in 1956, and won the 1957 and 1958 championships.

In 1965, Jarrett became a super star when he won 13 races and another Grand National championship. He placed among the top five in 42 of the 54 races that he ran. In 1965, he won at Darlington Raceway by 14 laps, which is the largest margin of victory in NASCAR history.

In 1966, Jarrett was in the run for another championship when Ford announced that they were withdrawing from NASCAR. With that, Jarrett decided that it was time to retire at the young age of 34. Jarrett is the only driver to retire as the NASCAR champion.

Jarrett left racing and dealt in real estate and other business ventures before coming back to racing as a broadcaster. He also was the track promoter for Hickory Motor Speedway. He has a daily radio program about racing on MRN Radio called "Ned Jarrett's World of Racing".

Ned is the father of Dale Jarrett, who earned his first NASCAR championship in 1999. Ned and Dale became the second father-son combination to win Cup championships (after Lee Petty and Richard Petty).

Secure Ned Jarrett for Your Event

Based on your interest in Ned Jarrett as a speaker or for a personal appearance, Direct Sportslink has provided you additional links below for other sports talent with similar appearance fees, speaker topics, and categories that match Ned Jarrett.