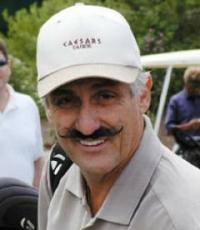 Rollie participated in a Q and A format for DWU's Annual Leadership Banquet. Former U.S. Senator George McGovern was the moderator and Rollie shared stories about his career and the leadership needed to win multiple World Series Championships.

A remarkably long-lived relief pitcher, Fingers was a key member of the great Oakland Athletics teams of the early 1970s. After a brief stint with Oakland in 1968, he joined the team at the beginning of the 1969 season and was an unsuccessful starting pitcher until 1971, when he was moved into the bullpen.

Fingers was named most valuable player of the 1974 World Series, when the As won their third straight championship with a five-game victory over the Los Angeles Dodgers; he picked up a victory and two more saves.

He was traded to the St. Louis Cardinals in 1981, but never pitched for them. Instead, he was sent on to the Milwaukee Brewers, and he was named the AL Cy Young Award winner and most valuable player, chalking up a 6-3 record with a league-leading 28 saves and a 1.04 ERA to help lead the Brewers into the East Division playoffs. Despite a victory and a save from Fingers, Milwaukee lost to the New York Yankees three games to two.

Secure Rollie Fingers for Your Event

Based on your interest in Rollie Fingers as a speaker or for a personal appearance, Direct Sportslink has provided you additional links below for other sports talent with similar appearance fees, speaker topics, and categories that match Rollie Fingers.