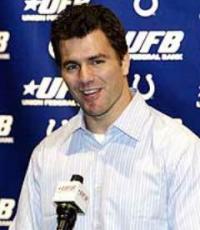 He is widely considered the best clutch kicker in NFL history; He is the first player ever to be the deciding factor in two Super Bowl wins
Fee Range: $10,000 - $20,000
Secure Adam Vinatieri
for Your Event

In 1996 he was signed by the Patriots as an undrafted free agent to be a place kicker. Vinatieri is best known for his impeccably calm demeanor and uncanny accuracy when the Patriots needed it the most.

In the 2001 playoffs, during a blizzard against the Oakland Raiders in the final game at Foxboro Stadium, Vinatieri kicked a 45-yard field goal to tie the game 13-13 and send it into overtime. The Patriots then won the game on another field goal of 23 yards by Vinatieri. That 45-yard kick in driving snow is regarded as one of the greatest clutch plays (and greatest kicks) in NFL history.

In March of 2006, Vinatieri signed with the Colts. Again he helped the win another Super Bowl, this time against the Chicago Bears. He has been named to the NFL 2000s All Decade Team.

He has been a spokesperson for the Blue Cross and Blue Shield of Rhode Island's teen anti-smoking contest. His hobbies include hunting, riding motorcycles and golfing. Vinatieri has also appeared in numerous television spots.

Secure Adam Vinatieri for Your Event

Based on your interest in Adam Vinatieri as a speaker or for a personal appearance, Direct Sportslink has provided you additional links below for other sports talent with similar appearance fees, speaker topics, and categories that match Adam Vinatieri.