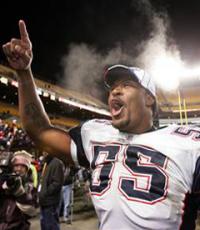 He was a cornerstone of the NFL New England Patriots' defense that won three Super Bowls in the early 2000's
Fee Range: $10,000 - $20,000
Secure Willie McGinest
for Your Event

A star in both football and basketball in high school, McGinest was also a four-year letterman at the University of Southern California (1990-1993). He received his degree in public administration at USC in 1994. He was drafted by the Patriots in the first round (fourth overall) of the 1994 NFL draft.

In the 2005 wild-card game against the Jacksonville Jaguars, he set an NFL postseason record by recording 4.5 sacks in one game as well as breaking Bruce Smith's record for the most all-time sacks in the postseason with 16 currently.

McGinest is dedicated to his hometown of Long Beach, California where he graduated from Long Beach Polytechnic High School with rapper Snoop Dogg. He established the Willie McGinest Freedom School, a program which aims to provide social and cultural enrichment for neighborhood youth. On May 3, 2005, the city council of Long Beach, California, declared that every year, May 3 will be recognized as Willie McGinest Day in Long Beach, in recognition of his longstanding charitable efforts and civic involvement.

Secure Willie McGinest for Your Event

Based on your interest in Willie McGinest as a speaker or for a personal appearance, Direct Sportslink has provided you additional links below for other sports talent with similar appearance fees, speaker topics, and categories that match Willie McGinest.