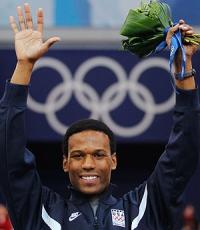 He was a gold medalist at the 2006 and 2010 Olympic Games
Fee Range: Contact Us
Secure Shani Davis
for Your Event

Shani joined the Evanston Speedskating Club at age six and within two months started competing locally. By age 8 he was winning regional age-group competitions and began to hear about the Olympic ideal from his competitors and friends at the Northbrook Speedskating Club. Shani won five National Age Group Championships (1995, 1997, 1999, 2000, and 2003) and also won a North American Championship in 1999. Shani became the first Black speed skater to earn a spot on the U.S. Olympic Team in 2002.  He began making skating history at age 17 when he became the first American skater to earn spots on both the short track and long track Junior World Team, accomplishing that feat three years in a row in 2000, 2001 and 2002.

At 23, Shani won Gold and Silver at the 2006 Olympics in Torino, Italy, and also repeated his World All-Around Title in Calgary. In the 2007 season, Shani won world titles in the 1000 meter and 1500 meter events.  The following season Shani repeated his 1000 meter World Title. The 2009 season saw Shani win his first World Sprint Title in Moscow, Russia, and his third 1500 meter World Title in Vancouver.  In 2010 he won Gold and Silver in the 2010 Olympic Winter Games - becoming the first speedskater to repeat as Olympic 1000 m Champion - and he won his third consecutive Overall World Cup Titles in the 1000 and 1500 meters.

Secure Shani Davis for Your Event

Based on your interest in Shani Davis as a speaker or for a personal appearance, Direct Sportslink has provided you additional links below for other sports talent with similar appearance fees, speaker topics, and categories that match Shani Davis.