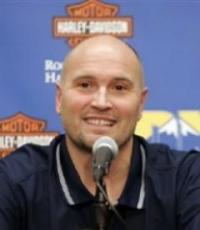 A high school basketball star at Apollo High in Owensboro, Kentucky, Chapman was heavily recruited by many universities. He chose, however, to stay close to home when he signed with the University of Kentucky. Chapman was a star at Kentucky, named All-SEC during his freshman and sophomore years and scoring 1,073 points in only two years.

After two years with Kentucky, Chapman was selected with the 8th overall pick in the 1988 NBA Draft and became the first player ever signed by the Charlotte Hornets in the franchise's history. Chapman was popular among basketball fans in Charlotte, as he averaged 16.9 points per game his first season there.

After retiring from active play Chapman remained with the Phoenix Suns, first as a scout and later as Director of Basketball Operations. For the 2004 and 2005 NBA Playoffs, he served as a color commentator on TNT. In 2005, he moved from Phoenix to accept a personnel scout position with the Minnesota Timberwolves. In 2006, he accepted the position of vice president of player personnel with the Denver Nuggets.

Secure Rex Chapman for Your Event

Based on your interest in Rex Chapman as a speaker or for a personal appearance, Direct Sportslink has provided you additional links below for other sports talent with similar appearance fees, speaker topics, and categories that match Rex Chapman.