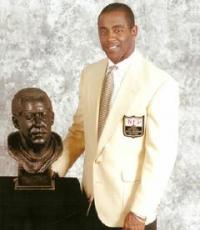 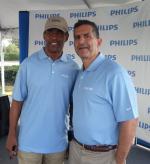 A big thank you to Direct Sportslink for coming through in the clutch. Our sports celebrity cancelled the day before our event and you did not flinch. You delivered a Hall of Famer in Tony Dorsett - negotiating with him, paying him and booking all his travel within 24 hours. Our booth was full the entire time of our event and his appearance was well received by our customers. Thanks again for being true professionals - we value your service.

A consensus All-American in 1975 and 1976 and winner of the 1976 Heisman Trophy as the nation's outstanding college player, Dorsett was the first player chosen in the 1977 NFL draft, by the Dallas Cowboys.

Ironically, the only time Dorsett led the league in rushing was the first time he failed to gain more than 1,000 yards, in the strike-shortened 1982 season, when he had 745 yards on 177 attempts in just 9 games. In post-season play, he set an NFL record with a 99-yard touchdown run against the Minnesota Vikings.

Secure Tony Dorsett for Your Event

Based on your interest in Tony Dorsett as a speaker or for a personal appearance, Direct Sportslink has provided you additional links below for other sports talent with similar appearance fees, speaker topics, and categories that match Tony Dorsett.