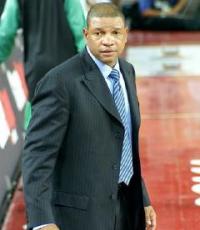 Glenn "Doc" Rivers was known for his defense while playing in the NBA. His skills as floor general and point guard helped him transition into a coach following his playing career.

After graduating from Marquette University, Rivers was drafted in the second round (31st overall) of the 1983 NBA Draft, moving into the starting lineup due to injury during his rookie season. He spent the next seven seasons as a starter in Atlanta, assisting star Dominique Wilkins as the team found great regular season success. He averaged a double-double for the 1986-87 season, scoring 12.4 points and helping out with 10.0 assists per game. Rivers later spent one year as a starter for the Los Angeles Clippers and two more for the New York Knicks, before finishing out his career as a solid bench player for the San Antonio Spurs.

Rivers began his coaching career with the Orlando Magic in 1999, where he coached for more than four NBA seasons. Rivers won the Coach of the Year award in 2000 after his first year with the Magic. That season, he led the team that was picked to finish last in the league to a near playoff berth. He made the post season in his next three years as coach, but was fired in 2003 after a disastrous start to the season.

Rivers took over the Boston Celtics coaching position in 2004 after spending a year working as a commentator for The NBA on ABC. As a result of the Celtics' 109-93 victory over the New York Knicks on January 21, 2008, Rivers, as the coach of the team with the best winning percentage in the Eastern Conference, earned the honor to coach the East for the 2008 NBA All-Star Game in New Orleans. His 2007-08 Celtics team won the NBA Championship over the Los Angeles Lakers. He was named Head Coach of the Los Angeles Clippers in June of 2013.

Based on your interest in Glenn "Doc" Rivers as a speaker or for a personal appearance, Direct Sportslink has provided you additional links below for other sports talent with similar appearance fees, speaker topics, and categories that match Glenn "Doc" Rivers.