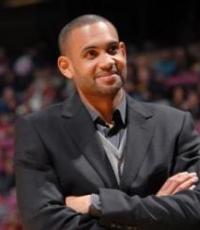 He was a member of two Duke University NCAA basketball champion teams
Fee Range: $20,000 - $30,000
Secure Grant Hill
for Your Event

As a collegiate with Duke University and early in his professional career with the Detroit Pistons, Hill was considered one of the best all-around players in the game, often leading his team in points, rebounds and assists.

Hill played four years with the Duke Blue Devils, winning national titles in 1991 and 1992, where Duke became the first Division I program to win consecutive titles since UCLA in 1973. Hill led Duke to the championship game once again in 199. He won the Henry Iba Corinthian Award as the nation's top defensive player in 1993, and in 1994 he was the ACC Player Of the Year.

During his collegiate career, Hill became the first player in ACC history to collect more than 1900 points, 700 rebounds, 400 assists, 200 steals and 100 blocked shots. As a result of his successful college career, he became the 8th player in Duke history to have his jersey number (33) retired. He played with many Duke greats including Bobby Hurley.

Hill was drafted by the Detroit Pistons with the third pick in the NBA Draft after graduating from Duke in 1994. In his first season, he became the first Pistons rookie since Isiah Thomas in 1981-82 to score 1000 points. Hill ended up sharing NBA Rookie of the Year Award honors with Jason Kidd of the Dallas Mavericks, becoming the first Piston since Dave Bing in 1966-67 to win the award. Hill also won the Sporting News Rookie Of the Year award.

Hill also won a gold medal at the 1996 Summer Olympics in Atlanta as a member of the U.S. men's basketball team, where he had the team's fifth highest scoring average (9.7) and led the team in steals (18).

At the conclusion of the 2004-05 season, Hill was awarded the Joe Dumars Trophy presented to the NBA Sportsmanship Award Winner. After the Pistons, he played for the Orlando Magic and Phoenix Suns (where Steve Nash was his teammate). in 2012 he signed a contract with the Los Angeles Clippers. He retired from the NBA in 2013.

Secure Grant Hill for Your Event

Based on your interest in Grant Hill as a speaker or for a personal appearance, Direct Sportslink has provided you additional links below for other sports talent with similar appearance fees, speaker topics, and categories that match Grant Hill.