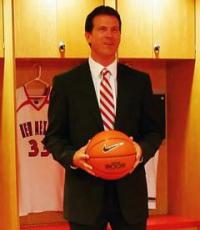 Steve Alford is a former NBA player and has coached several Division 1 college basketball teams including Iowa, New Mexico and UCLA since his retirement from the NBA. Alford, a former college basketball star and NBA player, was born in Franklin, Indiana and he grew up in New Castle, Indiana.

Alford played basketball at the high school level for his father, Sam Alford, who was coach at New Castle Chrysler High School in New Castle. As a high school senior, he averaged 37.7 points per game helping him earn the title of Indiana's Mr. Basketball in 1983.

Alford attended Indiana University. During his time there, he played basketball under head coach Bobby Knight and became the university's all time leading scorer with 2,438 points, a record later eclipsed by Calbert Cheaney, (who eventually went on to become the Big Ten's all time leading scorer.) Alford was the first player to be named the team's MVP four times. He was also a first team All-American, and was named Big Ten MVP during his senior year of college. In the Legends of College Basketball by The Sporting News Alford was no. 35 on the list of the 100 greatest Division One college basketball players. When The Sporting News named its top ten NCAA basketball players of the 1980s in December 1989, Alford was listed at number ten.

In 1987, Alford led the Hoosiers to the NCAA Championship Game against Syracuse. The Hoosiers won the game on a late baseline jumpshot by Indiana guard Keith Smart. Alford did his part, shooting 7-10 from the 3-point line, scoring 23 points.

Following college, Alford played for four years at the professional level. During his time in the NBA, he played for the Dallas Mavericks and Golden State Warriors. He scored 744 points, had 176 assists, and shot free throws with an accuracy of 87 percent.

Secure Steve Alford for Your Event

Based on your interest in Steve Alford as a speaker or for a personal appearance, Direct Sportslink has provided you additional links below for other sports talent with similar appearance fees, speaker topics, and categories that match Steve Alford.