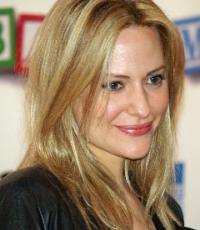 She became an inspiration by competing in track and field events at Georgetown University despite having both of her legs amputated
Fee Range: $10,000 - $20,000
Secure Aimee Mullins
for Your Event

Despite a disability that resulted in the amputation of both of her legs, Mullins competed against able-bodied athletes in NCAA Division I track and field events for Georgetown University and set Paralympic records in 1996 in Atlanta in the 100-meter dash and the long jump. Her personal bests are: 15.77 seconds for the 100-meter dash, 34.60 seconds for the 200 meter, and 3.5 meters for the long-jump.

Also while at Georgetown, Mullins won a place on the Foreign Affairs internship program, working at The Pentagon. She also makes appearances as a motivational speaker.

In 1999, she modelled for British fashion designer Alexander McQueen in his London show. She has been named one of the fifty most beautiful people in the world by People.

In 2002, she appeared in Matthew Barney's Cremaster 3 as a cheetah woman. In 2006, she appeared in World Trade Center, playing the role of a reporter. She also appeared, in 2003, in the made-for-television version of Agatha Christie's Five Little Pigs.

Secure Aimee Mullins for Your Event

Based on your interest in Aimee Mullins as a speaker or for a personal appearance, Direct Sportslink has provided you additional links below for other sports talent with similar appearance fees, speaker topics, and categories that match Aimee Mullins.