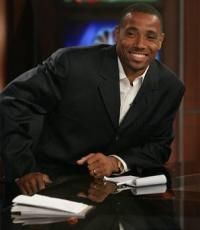 He was an integral part of two Super Bowl winning New England Patriot teams; He was a four time All-Pro selection
Fee Range: $10,000 - $20,000
Secure Rodney Harrison
for Your Event

Harrison was drafted in the fifth round of the 1994 draft, (145th overall) by the San Diego Chargers, the same year they made their first Super Bowl (Super Bowl XXIX), which they lost to the San Francisco 49ers. Harrison became a starting member of the Chargers' 1996 defense, going to two Pro Bowls with the Chargers in 1998 and 2001. He set then-career highs with the Chargers in 2000 with 127 tackles and six interceptions; in 2002 he started 13 games and recorded 88 tackles in his final season with the Chargers.

Following the 2002 season, Harrison signed with the Patiots. Prior to the 2003 season, Harrison was named a defensive captain in his first year with the Patriots by his teammates. In the AFC Championship Game the against the Indianapolis Colts, Harrison intercepted Peyton Manning in the end zone and forced a Marvin Harrison fumble recovered by teammate Tyrone Poole. Harrison then went on to help New England Patriots win their second title in three years, against the Carolina Panthers in Super Bowl XXXVIII, 32–29. Harrison was also named to the Associated Press' All-Pro team following a 140-tackle (a 2003 NFL best for a defensive back) and three-sack season in which he started all 16 regular season games.

The 2004 season produced a similar performance. Harrison helped New England's defense finish second in the NFL in scoring for 2004. For the second straight season, Harrison's 138 tackles led all defensive backs in the NFL. Harrison also started all sixteen regular season games for the sixth time in his career.

In the Patriots' divisional playoff game against the Colts, Harrison intercepted Peyton Manning late in the game to end the Colts' last chance. The next week in the AFC Championship, Harrison jumped a Ben Roethlisberger pass and took it 87 yards for a touchdown, helping the Patriots defeat the Pittsburgh Steelers, 41–27. Harrison, in Super Bowl XXXIX, would record seven tackles, a sack, and two interceptions of quarterback Donovan McNabb. The second interception, with ten seconds remaining in the game, preserved a 24–21 Patriot win, ensuring a third championship in four years.

On October 21, 2007, became the initial member of the 30/30 Club of players with both 30 interceptions and 30 sacks. From 2005-2008, Harrison faced versatility trying to overcome numerous injuries but on June 3, 2009, Harrison announced his retirement from football to become an analyst for NBC Sports' Football Night in America.

Secure Rodney Harrison for Your Event

Based on your interest in Rodney Harrison as a speaker or for a personal appearance, Direct Sportslink has provided you additional links below for other sports talent with similar appearance fees, speaker topics, and categories that match Rodney Harrison.