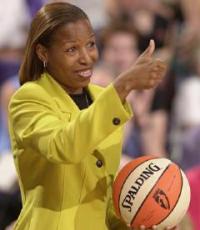 She won four WNBA titles with the Houston Comets in the WNBA and was the first WNBA player to reach 2,000 points scored
Fee Range: $10,000 - $20,000
Secure Cynthia Cooper
for Your Event

Cooper played at the University of Southern California where she won two national titles and was a freshman All-American in 1982. After graduating in 1996, she later played internationally in professional leagues in Italy, before arriving in the newly-formed WNBA in 1997.

Cooper was voted the WNBA's MVP in 1997 and 1998 and also won four WNBA Championships with the Houston Comets. During the Comet dynasty, she was a vital part of the triple threat offense with Sheryl Swoopes and Tina Thompson. When retired in 2000, Cooper became the first player in WNBA history to score 1,000 and 2,000 career points. She went on to coach the Phoenix Mercury for one and a half seasons.

Cooper returned as an active player in the 2003 season, but announced her final retirement from professional basketball in 2004. Afterwards, she later served as a TV analyst and halftime reporter for the Houston Rockets of the NBA.

In May 2005, Cooper was named the Head Coach of the women's basketball team at Prairie View A&M University.

In her first year at UNCW, Cooper was named CAA Coach of the Year.

On April 10, 2012, Cooper resigned from UNC Wilmington and became the head coach at Texas Southern.

Secure Cynthia Cooper for Your Event

Based on your interest in Cynthia Cooper as a speaker or for a personal appearance, Direct Sportslink has provided you additional links below for other sports talent with similar appearance fees, speaker topics, and categories that match Cynthia Cooper.