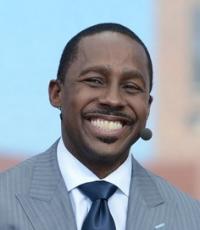 The moment which defined Howard's college career was his memorable touchdown-scoring 93-yard punt return against archrival Ohio State in 1991. Once he reached the end zone, Howard struck the now-famous "Heisman pose," thus causing ABC play-by-play commentator Keith Jackson to utter the line, "Hello, Heisman!" Since this moment, he has been credited with popularizing the "Heisman pose" as an on-field celebration for football players at all levels.

The Washington Redskins selected Howard in the first round, 4th overall in the 1992 NFL Draft. His most notable professional season was in 1996 when Howard also helped the Green Bay Packers to win Super Bowl XXXI with his 99-yard kickoff return touchdown that stopped the New England Patriots' hope for a comeback. Howard was named Super Bowl XXXI MVP and as of 2009 is only one of four people to ever win the Heisman Trophy and be named Super Bowl MVP. Howard also played for the Washington Redskins, Jacksonville Jaguars, Oakland Raiders, and the Detroit Lions.

Desmond has spent much of his career after football working for works for ESPN as a college football announcer for College Gameday.

Secure Desmond Howard for Your Event

Based on your interest in Desmond Howard as a speaker or for a personal appearance, Direct Sportslink has provided you additional links below for other sports talent with similar appearance fees, speaker topics, and categories that match Desmond Howard.