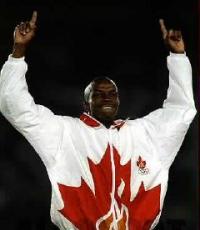 Born in Manchester, Jamaica, Bailey emigrated from Jamaica to Canada at age 13. He began competing as a 100m sprinter part-time in 1991, but he didn't take up the sport seriously until 1994.

The following year saw his international breakthrough. At the World Championships in Gothenburg, Sweden, Bailey won both the 100 metre sprint and the 4 x 100 metre relay titles.

He repeated that double win at the 1996 Atlanta Olympics, setting a world record of 9.84 seconds in the 100m (the previous record was set in July 1994 by American Leroy Burrell at 9.85 seconds). Many Canadians felt his victory restored the image of Canadian athletes, which had been tarnished by Ben Johnson's previous disqualified win at the 1988 Summer Olympics in Seoul. Bailey won a third world title in 1997 with the Canadian relay team, while finishing second in the 100m behind Maurice Greene.

In June of 1997 he raced against Michael Johnson in a 150m race at Toronto's SkyDome (now Rogers Centre), in a bid to truly determine who was the world's fastest man. He won $2 million for winning that race.

He retired from the sport in 2001 having been a five-time World and Olympic champion. At teh time of retirement, Donovan Bailey held the indoor world record in the 50 metres (5.56, in Reno, Nevada, in 1996), and the Olympic, Commonwealth and Canadian records for the 100m.

Secure Donovan Bailey for Your Event

Based on your interest in Donovan Bailey as a speaker or for a personal appearance, Direct Sportslink has provided you additional links below for other sports talent with similar appearance fees, speaker topics, and categories that match Donovan Bailey.