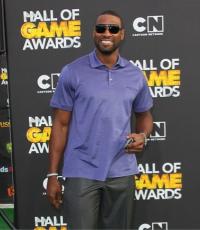 Nicknamed Megatron, Johnson played college football for Georgia Tech, and was recognized as an All-American twice. He was selected by the Lions with the second overall pick in the 2007 NFL Draft. On December 22, 2012, Johnson broke Jerry Rice's single-season record for receiving yards, which had previously been 1,848. In that same Saturday night game versus the Atlanta Falcons, Johnson also set the NFL records for consecutive 100-yard games (8) and consecutive games with 10 or more receptions (4). He also led the NFL in recieving in 2010, 2011, and 2012.

Secure Calvin Johnson for Your Event

Based on your interest in Calvin Johnson as a speaker or for a personal appearance, Direct Sportslink has provided you additional links below for other sports talent with similar appearance fees, speaker topics, and categories that match Calvin Johnson.