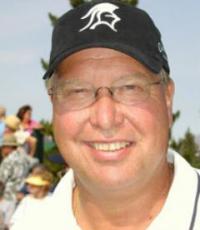 He is a former famous Philadelphia Eagles quarterback known as "Jaws"; He has spent much of his off field career as a NFL analyst
Fee Range: $10,000 - $20,000
Secure Ron Jaworski
for Your Event

Ron Jaworski with a Jack and Jill Employee

Jack and Jill Ice Cream was searching for a local Philadelphia sports celebrity who fit within their budget, was still current, and could give a motivational speech to their sales and marketing group. Ron delivered for the client - please see the testimonial below.

In 1980 Jaworski was named the UPI "NFL Player of the Year", and also in that same year he received the Bert Bell Award, The Maxwell Football Club's Professional Player of the Year, and the "Professional Athlete of the Year" award sponsored by Dunlop Tire Co. (the Philadelphia Eagles reached the Super Bowl that year, but lost to the Oakland Raiders quarterbacked by Jim Plunkett).

In 1991 Jaworski was inducted into the National Polish-American Hall of Fame. In 1992 Jaworski was inducted into the Philadelphia Eagles Honor Roll, and in 1994 he was nominated for admission to the Pro Football Hall of Fame in Canton, Ohio (his first year of eligibility for this as he had retired five years earlier, in 1989). In 1997 he received the Pinnacle Award from the South Jersey Chamber of Commerce for his outstanding volunteer work and longtime service to the South Jersey Chamber as well as the business community. In 1997 Jaworski received the Bert Bell award from the Eagles Fly for Leukemia, which is given to the person who had contributed significantly to the NFL.

In 1998, The United Way honored Ron with their Volunteer Leadership Award, which is the highest award given by the United Way.

He has worked for many years as a NFL analyst. He is considered the best in the business at breaking down game film.

Secure Ron Jaworski for Your Event

Based on your interest in Ron Jaworski as a speaker or for a personal appearance, Direct Sportslink has provided you additional links below for other sports talent with similar appearance fees, speaker topics, and categories that match Ron Jaworski.