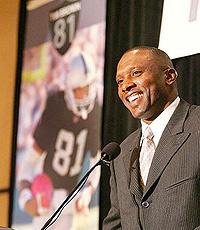 A Tim Brown personal appearance, Tim Brown speaking engagement, or Tim Brown endorsement will reflect well on your company. To hire Tim Brown now for any corporate appearance, fundraiser, motivational speaker event, personal appearance, autograph signing, or website endorsement please contact our celebrity agents at 1-877-6-SPORTS. We will contact Tim Brown or contact Tim Brown's agent and provide you with the booking fees and availability immediately upon your request. Direct Sportslink is the only sports speakers bureau and talent booking agency based in the United States securing only sports talent for corporations, associations, and organizations for motivational speaking engagements, personal appearances, and endorsements. We are the premier sports celebrity booking agency and a sports celebrity procurement expert. Accordingly, we will provide you with any relevant Tim Brown website information and booking agent details so that you can hire Tim Brown for your next event.

Brown had always been a fan favorite in the Oakland area and was much admired by many current and former Raiders players & staff over the 15 years he spent with the Raider organization.

In 2005, Tim Brown signed a one day contract with the Raiders to retire with the team he played 16 seasons for. Brown retired with 14,934 receiving yards, the second highest total in NFL history, 1094 receptions (3rd), and 100 touchdown catches (3rd-Tied). Brown also gained 190 rushing yards, 3,320 punt return yards, 3 fumble return yards, and 1,235 yards returning kickoffs. This gave him a total of 19,682 combined net yards, ranking him #5 among the NFL's all time leaders in that category at the time of his retirement.

in 2015 Tim Brown was elected to the Pro Football Hall of Fame.

Secure Tim Brown for Your Event

Based on your interest in Tim Brown as a speaker or for a personal appearance, Direct Sportslink has provided you additional links below for other sports talent with similar appearance fees, speaker topics, and categories that match Tim Brown.