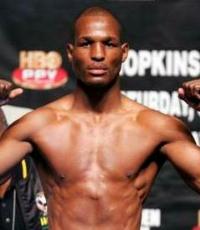 He is regarded by experts to be one of the best middleweight fighters of all time; He successfully defended the middleweight title a record twenty times and was undefeated for 12 years between 1993 and 2005
Fee Range: Contact Us
Secure Bernard Hopkins
for Your Event

Bernard Hopkins, nicknamed "The Executioner" is a professional boxer from Philadelphia, Pennsylvania.  He is regarded by experts to be one of the best middleweight fighters of all time.

Hopkins successfully defended the middleweight title a record twenty times and was undefeated for 12 years between 1993 and 2005. From his victory over Oscar De La Hoya in September 2004 until his loss to Jermain Taylor in July 2005, Hopkins was the undisputed holder of the championship belts from all 4 major sanctioning bodies (WBA, WBC, IBF and WBO). In addition, he was awarded the coveted linear 'Ring Belt' after defeating Felix Trinidad in September 2001. His career record stands at 46 wins, four losses, one draw, and one no contest with 32 knockouts.

In the biggest fight of his career, Hopkins fought six-division titleholder De La Hoya for the undisputed middleweight championship on September 18, 2004 in Las Vegas. Hopkins won the bout with a knockout in the ninth round. He said he ended the De La Hoya fight with a perfect punch to the liver. "Chopped liver with Hopkins sauce," he said.

De La Hoya soon thereafter invited Hopkins to join his boxing promotional firm, Golden Boy Promotions, as president of its new east coast chapter. Their alliance was announced publicly on November 20, 2004. Hopkins is expected to sign and guide the careers of young east coast fighters, including several from his hometown of Philadelphia.

On May 21, 2011 Hopkins defeated Pascal by unanimous decision to capture the WBC, IBO, andThe Ring Light Heavyweight belts. With the win, Hopkins became the oldest man in the history of the sport to win a major world title, supplanting George Foreman.

Secure Bernard Hopkins for Your Event

Based on your interest in Bernard Hopkins as a speaker or for a personal appearance, Direct Sportslink has provided you additional links below for other sports talent with similar appearance fees, speaker topics, and categories that match Bernard Hopkins.