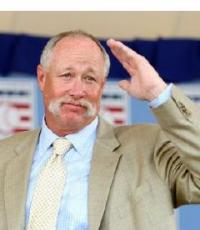 He was inducted into the Baseball Hall of Fame in 2008; He is one of the best closers to ever play professional baseball; He made nine All-Star appearances and appeared in three World Series
Fee Range: $10,000 - $20,000
Secure Goose Gossage
for Your Event 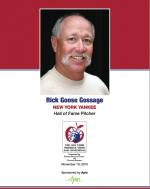 Direct Sportslink secured Goose Gossage for the New York Food and Produce Show. A former New York Yankees sensation, Goose's appearance was well received as he signed autographs and took pictures with guests at the show.

Goose Gossage played 21 seasons for nine different teams before retiring in 1994. During his career, Gossage earned 310 saves and recorded 1502 strikeouts. He also made nine All-Star appearances and pitched in three World Series.

The New York Yankees of the late 1970s and early 1980s arguably pioneered the set-up/closer configuration which is used by most of the better teams today. The most effective pairing was Ron Davis and Gossage, with Davis typically entering the game in the 7th or 8th innings and Gossage closing. During one stretch, with that pairing, the Yankees won 77 of 79 games in which they led after 6 innings, and they had several other runs that were almost as remarkable.

When he retired he was ranked third in major league history in career games pitched (1,002).

Gossage is active in the community promoting and sponsoring youth sports. In 1995, the City of Colorado Springs dedicated the Rick "Goose" Gossage Youth Sports Complex, which features five fields for youth baseball and softball competition. He has written an autobiography, released in 2000, called "The Goose is Loose."

He was inducted into the Baseball Hall of Fame in 2008.

Secure Goose Gossage for Your Event

Based on your interest in Goose Gossage as a speaker or for a personal appearance, Direct Sportslink has provided you additional links below for other sports talent with similar appearance fees, speaker topics, and categories that match Goose Gossage.