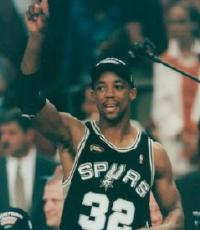 Elliott played high school basketball at Cholla High School in Tucson, Arizona, played college basketball at the University of Arizona, under the tutelage of Lute Olson, and won the Wooden Award after an exceptional senior season. He was drafted by the San Antonio Spurs in the first round in 1989. Elliott spent his entire career with the San Antonio Spurs, except for the 1993-94 season, during which he played for the Detroit Pistons. Elliott was an instrumental part of the Spurs' successful NBA title quest in 1999: he tight-roped the right sideline and launched a three-point basket to edge the Portland Trail Blazers in Game 2 of the Western Conference Finals. This play, referred to as the "Memorial Day Miracle", shifted the momentum of the series to the Spurs.

Shortly after the championship run, Elliott announced that he had played despite having a kidney disease, focal segmental glomerular sclerosis, and that he would require a transplant. He underwent surgery on August 16 of that year, receiving a kidney from his brother, Noel. On March 13, 2000, Elliott became the first player to return after a kidney transplant, in a game against the Atlanta Hawks. He announced his retirement in 2001.

Elliott's career high was 41 points against the Dallas Mavericks on December 18, 1992. He finished his career averaging 14.2 points per game, 4.3 rebounds per game and 2.6 assists per game. When he retired, Elliott was the all-time franchise leader in three-point field goals made (563) and attempted (1,485).

Elliott was basketball analyst for The NBA on NBC and, during the 2003-2004 season, for ABC Sports and ESPN. He left that position for the 2004-2005 season and became the color commentator for the Spurs' Local Broadcasting.

Elliott's inspirational comeback and solid career was recognized by the Spurs on March 6, 2005, when his #32 jersey was retired and hung in the rafters of the AT&T Center.

Secure Sean Elliott for Your Event

Based on your interest in Sean Elliott as a speaker or for a personal appearance, Direct Sportslink has provided you additional links below for other sports talent with similar appearance fees, speaker topics, and categories that match Sean Elliott.