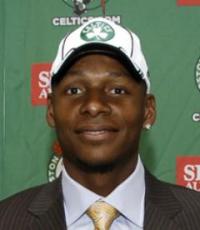 His basketball jersey number is retired by the University of Connecticut; He has scored over 20,000 points in the NBA; He was a member of the Gold Medal winning U.S. Olympic Men's Basketball team in 2000
Fee Range: $30,000 - $40,000
Secure Ray Allen
for Your Event

A Ray Allen personal appearance, Ray Allen speaking engagement, or Ray Allen endorsement will reflect well on your company. To hire Ray Allen now for any corporate appearance, fundraiser, motivational speaker event, personal appearance, autograph signing, or website endorsement please contact our celebrity agents at 1-877-6-SPORTS. We will contact Ray Allen or contact Ray Allen's agent and provide you with the booking fees and availability immediately upon your request. Direct Sportslink is the only sports speakers bureau and talent booking agency based in the United States securing only sports talent for corporations, associations, and organizations for motivational speaking engagements, personal appearances, and endorsements. We are the premier sports celebrity booking agency and a sports celebrity procurement expert. Accordingly, we will provide you with any relevant Ray Allen website information and booking agent details so that you can hire Ray Allen for your next event.

Ray Allen is known as one of the best three-point shooters in the history of the NBA.

Allen was a highly successful college basketball player at the University of Connecticut from 1993-96. He earned All-American status during the 1994-95 season and was also named USA Basketball's Male Athlete of the Year for 1995. In his next and final college season, Allen was named first-team All-America and received the Big East Player of the Year award.

In 2001, he won the NBA All-Star Weekend three-point contest. He was also drafted for a role in the critically acclaimed film He Got Game, in which he starred as a high school basketball phenom Jesus Shuttlesworth.

Allen played with the Bucks for the first 6½ years of his career until 47 games into the 2002-03 season, when he was traded to the Sonics. The move to Seattle did not hurt Allen's game; he bounced back from an injury-riddled 2004 to be voted to the All-NBA Second Team in 2005. In the 2005-06 regular season, he averaged a career-high 25.1 points per game while adding 4.3 rebounds and 3.7 assists per game.

On April 19, 2006, against the Denver Nuggets, Allen broke Dennis Scott's ten-year-old NBA record for three-point field goals in a season by sinking his 268th.

On February 5, 2007 his number was retired at Gampel Pavilion on the University of Connecticut campus in Storrs, Connecticut during halftime of the men's basketball game against the Syracuse Orangemen as part of the "Huskies of Honor" ceremony which recognized the accomplishments of 13 former players and three former coaches.

After becoming a free agent on July 1, 2010, Allen re-signed two year-deal with the Boston Celtics.

During a game against the Los Angeles Lakers on February 10, 2011, Allen became the all-time NBA leader in total 3-point field goals made (2,562), surpassing Reggie Miller's record of 2,560. In the 2010-11 season Allen was named to his tenth All-Star game alongside teammates Rajon Rondo, Paul Pierce and Kevin Garnett. He signed witht he Miami Heat as a free agent in 2012.

Secure Ray Allen for Your Event

Based on your interest in Ray Allen as a speaker or for a personal appearance, Direct Sportslink has provided you additional links below for other sports talent with similar appearance fees, speaker topics, and categories that match Ray Allen.