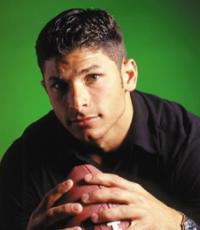 Chrebet played wide receiver for the New York Jets of the NFL from 1995 to 2005.

Chrebet is well-known for being a reliable option when a quarterback needed to convert a third-down. After being a walk-on at Hofstra University, Chrebet developed himself into one of the NFL's most reliable possession receivers and, historically speaking, one of the Jets' most prolific offensive talents. Chrebet's success translated into wins on the field for his team also, as he helped the Jets win the AFC East division in 1998 and 2002 and has become one of the most popular players in Jets history.

Chrebet is also known for his toughness. Despite being relatively small in stature, Chrebet has suffered nine concussions but continued to play professional football. On December 22, 2005, Chrebet announced his retirement from the game, due to his latest head injury. He ended his career with 580 receptions, second only to Don Maynard on the all-time Jets list.

Chrebet is routinely invited to attend Jets games as a guest of honor by the owner and also routinely serves as an ambassador on behalf of the New York Jets and National Football League via community service and public relations events. Chrebet served as the "FCS Championship Game Ambassador" for the 2009 FCS Championship Game between Villanova and Montana.

The NFL Network recognized Wayne Chrebet's career in 2009 by including Chrebet in their Top 10 episode "Best Undrafted Players."

Secure Wayne Chrebet for Your Event

Based on your interest in Wayne Chrebet as a speaker or for a personal appearance, Direct Sportslink has provided you additional links below for other sports talent with similar appearance fees, speaker topics, and categories that match Wayne Chrebet.