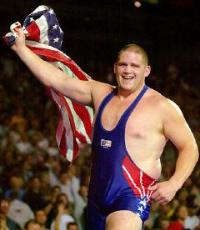 He defeated Alexander Karelin who had not lost in thirteen years to win the 2000 Olympic Gold Medal in Greco-Roman wrestling
Fee Range: $10,000 - $20,000
Secure Rulon Gardner
for Your Event

Rulon Gardner is an amateur wrestler in the Greco-Roman discipline from the United States. His strength is often attributed to the physical labor on the dairy farm he grew up on. He graduated from the University of Nebraska. He then worked as a middle school teacher and motivational speaker.

Gardner is perhaps most well known for his defeat of Alexander Karelin in the 2000 Summer Olympics. Karelin had been undefeated for 13 years, and had not given up a point in 6 years, prior to his loss in the gold medal match to Gardner.

After the 2000 Olympics he suffered a series of injuries, including an amputated toe and a dislocated wrist. He was also in a motorcycle accident. Despite his injuries, he won the U.S. Olympic trials for his weight class and competed in the 2004 Summer Olympics. At the 2004 Olympics, he was unable to repeat his 2000 performance, although he did win a bronze medal. After the bronze medal match, he left his shoes on the mat as a traditional symbol of retirement.

Gardner has since begun competing in mixed martial arts and in 2005 he became the host for a professional wrestling league called Real Pro Wrestling.

Gardner served as an analyst for NBC Sports coverage of Wrestling at the 2008 Summer Olympics. He was also a contestant on the 11th season of the Biggest Loser.

Secure Rulon Gardner for Your Event

Based on your interest in Rulon Gardner as a speaker or for a personal appearance, Direct Sportslink has provided you additional links below for other sports talent with similar appearance fees, speaker topics, and categories that match Rulon Gardner.