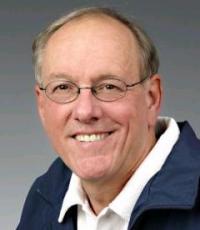 He is one of the best college basketbal coaches ever having played for and coached at Syracuse University
Fee Range: $10,000 - $20,000
Secure Jim Boeheim
for Your Event

Boeheim walked onto the men's basketball team at Syracuse, earning team captain status and leading the Orange to the team's second-ever NCAA tournament berth his senior season. In 1976, Boeheim was hired as the head coach of his alma mater, and to this day, Boeheim is one of the rare individuals to spend his entire college basketball career (player, assistant coach, and head coach) at only one school.

So far, Boeheim has guided the Orange to over 25 NCAA tournament appearances. He has led Syracuse to three Final Fours, and three national championship games, winning it all in 2003.

He was inducted into the College Basketball Hall of Fame in 2005.

Boeheim fought a personal battle with cancer, which has led to his devotion in the NCAA's annual "Coaches vs. Cancer" tournament.

Secure Jim Boeheim for Your Event

Based on your interest in Jim Boeheim as a speaker or for a personal appearance, Direct Sportslink has provided you additional links below for other sports talent with similar appearance fees, speaker topics, and categories that match Jim Boeheim.