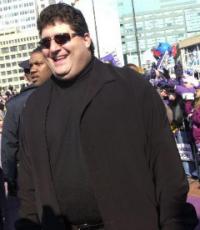 He helped lead the Ravens to their first Super Bowl victory in franchise history in Super Bowl XXXV
Fee Range: $10,000 - $20,000
Secure Tony Siragusa
for Your Event

Nicknamed "Goose," Siragusa signed with the Indianapolis Colts in 1990 as an undrafted free agent. He remained with the team through the 1996 season.

In 1997, Siragusa signed with the Baltimore Ravens. He was a key part of the 2000 Baltimore Ravens defense that allowed the fewest total points in NFL regular season history. He helped lead the Ravens to their first Super Bowl in franchise history in Super Bowl XXXV where they beat the New York Giants 34-7.

Siragusa has been sideline reporter during NFL games on the Fox Network. He has also appeared as the character Frankie Cortese in the HBO hit series The Sopranos. He partnered up with Michael Romanelli and opened a restaurant chain called Tiffany's (Tifs). He also has hosted "Man Caves" on the DIY network and has presented a documentary program called Megamachines.

Secure Tony Siragusa for Your Event

Based on your interest in Tony Siragusa as a speaker or for a personal appearance, Direct Sportslink has provided you additional links below for other sports talent with similar appearance fees, speaker topics, and categories that match Tony Siragusa.