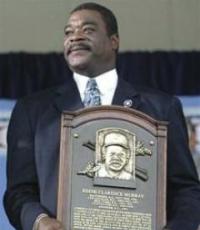 He is a member of the Baseball Hall of Fame; Member of the 1983 World Series Champion Baltimore Orioles
Fee Range: $10,000 - $20,000
Secure Eddie Murray
for Your Event

Eddie Murray is a former Major League Baseball first baseman. He was known as one of the most reliable and productive hitters during his 21 year career, earning the nickname "Steady Eddie". Murray is regarded as one of the best switch hitters ever to play the game.

Murray was selected by the Baltimore Orioles in the 3rd round of the 1973 amateur draft and had several successful seasons in the minor leagues. He debuted at the major league level on April 7, 1977 and played in 160 games for the Orioles in his first season. He won the American League Rookie of the Year award by batting .283, hitting 27 home runs and contributing 88 RBI.

With the Orioles from 1977 until 1988, Murray averaged 28 home runs and 99 RBI and was a perennial candidate for the MVP award, twice finishing second in the voting. The Orioles also appeared in the post-season twice, in 1979 and 1983, and won the World Series in 1983.

Murray was traded on December 4, 1988 to the Los Angeles Dodgers for Juan Bell, Brian Holton and Ken Howell and had three successful seasons with the Dodgers, knocking in 88, 95 and 96 runs.

Prior to the 1992 season, Murray signed a two-year deal with the New York Mets, for whom he played well despite playing for one of the worst teams in the major leagues. In 1993 he again drove in 100 runs, this time for the final time in his career.

After playing for several teams, he retired after the 1997 season with 504 home runs, ranking him second among switch-hitters behind Mickey Mantle's 536.

Secure Eddie Murray for Your Event

Based on your interest in Eddie Murray as a speaker or for a personal appearance, Direct Sportslink has provided you additional links below for other sports talent with similar appearance fees, speaker topics, and categories that match Eddie Murray.