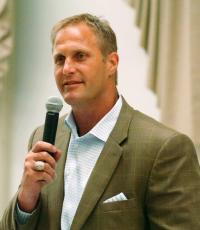 Chad Hennings started his college football career as a defensive tackle for the United States Air Force Academy in 1984. His sophomore year, he helped the team win the Bluebonnet Bowl placing the Air Force fifth in the final coaches poll. In 1987, his senior year, he led the nation with 24 sacks, was a first-team All American selection, and earned the Outland Trophy as the nations top interior lineman.

After serving in the Air Force, Hennings joined the NFL with the Dallas Cowboys in 1992. He contributed to the top ranked defenses of the early nineties and winning 3 Super Bowls in just 4 years.

Secure Chad Hennings for Your Event

Based on your interest in Chad Hennings as a speaker or for a personal appearance, Direct Sportslink has provided you additional links below for other sports talent with similar appearance fees, speaker topics, and categories that match Chad Hennings.