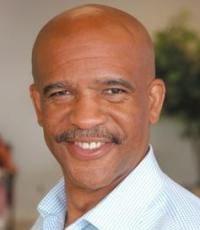 He was a key player for the Super Bowl XII Champion Dallas Cowboys; He is well known for his "Hail Mary" catch from Roger Staubach
Fee Range: $10,000 - $20,000
Secure Drew Pearson
for Your Event

Direct Sportslink secured Drew Pearson as the luncheon speaker for MasterGuard. Drew's insight to business having owned a successful business was a key component to the success of the event. The local crowd loved his Cowboys stories. You can view another client's testimonial on Drew's speaking ability below.

Everything was wonderful! Drew Pearson was such a friendly, outgoing person and I had some great conversations with him. He is probably the most friendly, down-to-earth celebrity we've ever had at our golf tournament! Thanks for everything.

In 1973, Pearson was selected as a free agent by the Dallas Cowboys, where he rose to become one of the NFL's greatest wide receivers, earning career records of 489 receptions and 7,822 receiving yards. Named one of the Top 20 Pro Football All-Time Wide Receivers, he was also recognized for his achievements by being named to the 1970's NFL Hall of Fame's All-Decade Team.

In 1980, the Cowboys selected Pearson as their nominee for NFL Man of the Year. Pearson is known around the NFL as "Mr. Clutch" for his numerous clutch catches in game-winning situations, especially the "Hail Mary" reception that sealed the victory in a 1975 playoff game, one of the most famous plays in NFL history.

Since his retirement in 1983, Pearson has worked extensively as a sports broadcaster for such networks as CBS and HBO, and hosted the 98.7 KLUV Dallas Cowboys post-game show.

Secure Drew Pearson for Your Event

Based on your interest in Drew Pearson as a speaker or for a personal appearance, Direct Sportslink has provided you additional links below for other sports talent with similar appearance fees, speaker topics, and categories that match Drew Pearson.