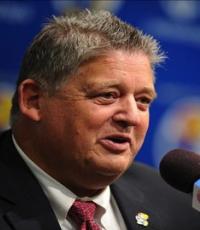 He was the offensive coordinator who helped lead the New England Patriots to three Super Bowl victories
Fee Range: $20,000 - $30,000
Secure Charlie Weis
for Your Event

Weis launched his professional coaching career in 1990 when he was named offensive assistant and assistant special teams coach for the New York Giants. The Giants went on to win Super Bowl XXV at the end of that season, beating the Buffalo Bills by a score of 20–19. In 1991, Weis stayed on as the running back coach for two seasons, then began a four-year stint with the New England Patriots. For the first two years (1993–1994), Weis served as the tight end coach. In 1997, Weis became the offensive coordinator of the New York Jets in addition to duties as the team's primary receivers coach. In his second year as offensive coordinator, the Jets finished fourth in the National Football League in offense. Weis served as the team's offensive coordinator from 1997 to 1999.

In 2004, Notre Dame hired Weis, who was named Notre Dame's 28th head football coach on December 12, 2004. In his first season as head coach of the Fighting Irish, Weis took Notre Dame to the 2006 Fiesta Bowl in Tempe, Arizona, on January 2, 2006 which they lost to the Ohio State Buckeyes by a score of 34–20. The Irish finished ninth in the final AP Poll and eleventh in the Coaches Poll. His team's success on the field helped make Weis winner of the 2005 Eddie Robinson Coach of the Year Award. During the 2006 season, Weis led the Fighting Irish to a 10–2 regular season record, and a second straight BCS berth, this time losing 41–14 in the Sugar Bowl to the LSU Tigers.

Secure Charlie Weis for Your Event

Based on your interest in Charlie Weis as a speaker or for a personal appearance, Direct Sportslink has provided you additional links below for other sports talent with similar appearance fees, speaker topics, and categories that match Charlie Weis.