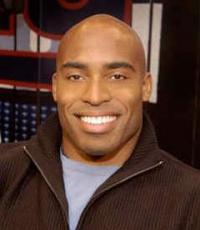 Tiki and his twin brother Ronde Barber were born in Roanoke, Virginia to James and Geraldine Barber. He attended Cave Spring High School in Roanoke and was valedictorian of his graduating class.

He attended the University of Virginia, gaining 4,883 all-purpose yards. He was the first player in school history to rush over 1,000 yards in back-to-back seasons, setting the top two single-season school records in 1995 and 1996 of 1,397 and 1,360 yards respectively.

In October of 2006, on behalf of their family, Tiki and Ronde Barber made a donation of $1 million (USD) to their alma mater. At the event where the check was presented, the Barber brothers cited their mother's influence, particularly related to academics and civic participation.

Hiring Tiki Barber for motivational speaker events is easier today since he has retired from professional football. As a broadcaster he showed why his speaker fee is well worth the money. He is a good looking, well spoken, and popular sports celebrity who can speak about more than just football.

Tiki makes various personal appearances every year that have included Super Bowl appearances, media appearances, and appearances on behalf of his corporate partners. His appearance fee is lower on the east coast than west coat since he usually travelsfrom the area.

Secure Tiki Barber for Your Event

Based on your interest in Tiki Barber as a speaker or for a personal appearance, Direct Sportslink has provided you additional links below for other sports talent with similar appearance fees, speaker topics, and categories that match Tiki Barber.