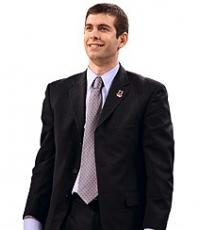 He coached Butler to back-to-back NCAA Championship appearances; He has coached in the NBA
Fee Range: $10,000 - $20,000
Secure Brad Stevens
for Your Event

Stevens attended DePauw University, where he played basketball and earned a degree in economics. He made the all-conference team multiple times and was a three-time Academic All-America nominee. Stevens joined the Butler basketball program as a volunteer prior to the 2000–01 season. He was promoted to a full-time assistant coaching position for the 2001–02 season. On April 4, 2007, he became the head coach.

In his first year, Stevens led Butler to 30 wins, becoming one of the youngest head coach in NCAA Division I history to have a 30-win season. In 2010, his third year as head coach, Stevens broke the NCAA record for most wins in a coach's first three years, exceeding the previous record by eight. The 2009–10 team finished undefeated in conference play, becoming the first Horizon League team to do so. In the postseason, Stevens coached Butler to the first Final Four in school history. At 33 years old, Stevens became one of the youngest head coaches to make a NCAA National Championship game, losing 61-59 to Duke. With the 2010–11 team making the Final Four, Stevens became the youngest coach to go to two Final Fours. Stevens coached the Bulldogs in their second consecutive national championship game on April 4, 2011, where the team lost to the Huskies of the University of Connecticut.

Stevens is known for a calm, focused coaching style. He spends a lot of time analyzing opponents using statistical analysis, adding new wrinkles to his team's play each game. He puts a strong emphasis on defensive and team oriented basketball. Butler's success against teams with superior athletes has been attributed to Stevens' coaching style and calm demeanor. Stevens has twice been named the Horizon League Coach of the Year and won collegeinsider.com's Hugh Durham Award mid-season honors in January 2009. He has also been both a Hugh Durham Award and Jim Phelan Award finalist all three years of his career.

He was named head coach of the Boston Celtics in 2013.

Secure Brad Stevens for Your Event

Based on your interest in Brad Stevens as a speaker or for a personal appearance, Direct Sportslink has provided you additional links below for other sports talent with similar appearance fees, speaker topics, and categories that match Brad Stevens.